When it comes to keeping those eight-legged friends away, you can count on Earthwise.

How Can We Help?

Most Spiders Are Harmless...

That doesn’t mean you want them in your home! Many people have a fear of spiders and the sight of one in the house is enough to make them lose sleep. Whether you have a few too many spiders in the home or you found a black widow or brown recluse spider, the team at Earthwise Pest Management can help keep those arachnids at bay! Give us a call or fill out our contact form today to get a free spider control quote from one of our pest control experts in Sacramento.

Types of Spiders We Deal With

Those Spiders Have Got To Go!

Spiders are a common household pest that we often receive calls about. While spiders do not typically create the same kind of overwhelming infestation that rodents or termites do, seeing a few too many of these eight-legged fiends in the home is enough to make anyone call their local pest control company in Sacramento.

Keeping spiders out of the home is a tough task, but with the right tools and your Top-Rated Local pest control team, it can be done! When it comes to spider control in Sacramento and the surrounding areas, Earthwise Pest Management can help. On this page, you will find information about spiders, including common types of house spiders and even some fun myths about spiders.

When someone calls us about a spider problem, it is usually one of two situations. Either the homeowner has spotted a black widow or a brown recluse, two venomous spiders we will discuss below, or, they are simply dealing with ‘house spiders’ and want to find out how to keep spiders out of their home. House spiders are a specific type of spider, though the term is generally used for any common-looking spider that resides in the home.

Generally speaking, house spiders are brown to light tan in color with various markings. They like dark spaces like garages, basements, and crawl spaces but will venture into the main living areas from time to time. Though they can bite, they rarely do. Other than causing an itchy bite, most spiders are completely harmless unless a person happens to have an adverse allergic reaction which is incredibly rare.

That heading might be a little bit misleading. While we love helping homeowners live a pest-free life, we also don’t want to cause anyone to fear spiders without knowing the whole truth. In this section, we will discuss two spiders with a bad reputation: the black widow and the brown recluse. These spiders can be dangerous and do have potent venom, but they are also (usually) not lethal weapons. Read on below to discover a little more information about these creepy crawlers. 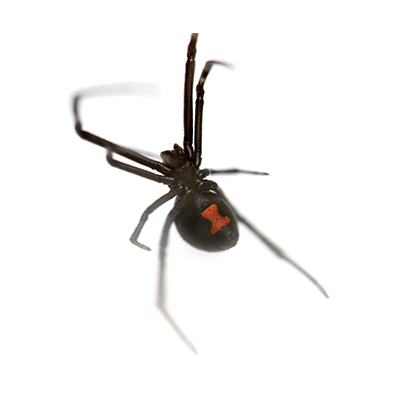 Black widows are perhaps the most feared of all spiders, but they have a bit of an overblown bad reputation as you will discover. There are many species of black widows that do not look like the typical shiny, black, and round spider with a red hourglass that most of us picture when we hear the name.

Though extremely venomous, black widows are not aggressive unless threatened. Many people believe that a black widow bite is a death sentence, but this is rarely the case. Black widow venom is 15 times more powerful than a rattlesnake’s, but unlike rattlesnakes, it is meant to kill flies, crickets, and other small bugs that may end up in its web — not people or animals. Most black widow fatalities occur in young children, the elderly, or people with compromised immune systems, and even those incidents are rare if medical attention is sought.

Some people may react more strongly to a black widow bite than others, experiencing symptoms such as severe abdominal pain, tremors, muscle stiffness or weakness, vomiting, and excessive sweating. If you experience any of these symptoms and you feel like it is not a life-or-death situation, give your doctor a call or you can even contact a Poison Control Center to speak with an expert about your symptoms. Many people do not need medical intervention and those who do seek medical attention often make a full recovery. 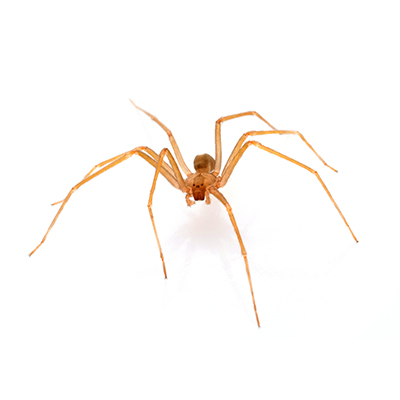 Brown recluses are typically light brown or tan in color and can be about the size of a quarter, including their legs. They are known as the Fiddleback spider because they feature a dark brown or black mark on the back of their neck that looks like a violin. Like their name suggests, brown recluses tend to hide far away from human activity and are often found in basements, sheds, or woodpiles.

Brown recluse bites are typically painful at the time of the bite, feeling similar to a pinch or a bee sting. Symptoms of a brown recluse bite include an ulcer at the bite location and possible skin discoloration in that area. You may also experience chills, fever, joint pain, muscle weakness, and nausea. In extreme cases, a person might experience seizures within 48 hours of the bite.

There are rumors that brown recluse bites can cause necrosis. This is not usually a result of the venom itself but from secondary infections at the bite area. Many people do not experience any symptoms more extreme than a pimple-like bump. However, if you are bitten by a brown recluse and experience an ulcer-like lesion, seek medical attention to ensure the wound remains clean and free of infection. Otherwise, like the black widow, give your doctor a call if you are concerned, if you or the person bitten is in an at-risk group, you can visit the emergency room as a precaution.

These are two common misconceptions about spiders. In general, the term ‘bug’ is used to describe any creepy crawly pest, but in the animal kingdom, bugs, insects, and arachnids are all very different. Insects are classified as having two sets of wings, sensory antennae, six legs, and a three-part body. Spiders, on the other hand, are arachnids, which have two body parts and eight legs. However, ticks, scorpions, and mites are also arachnids. For that reason, all spiders are arachnids but not all arachnids are spiders.

When you imagine a spider web, you likely picture an orb web. Orb webs are the classic spiral spider web that you see in cartoons. However, very few spiders actually follow this pattern of web making. These are just the ones we usually notice as they span between fence posts or tree branches.

There are also funnel-web spiders that build conical webs on the ground so they can hide in the narrow end and attack prey as it enters the open end. Cobweb spiders create messy, sticky cobwebs in the corners where your ceiling meets your walls. Sheet web spiders are responsible for creating flat blanket-like webs on the grass, forest floors, or in trees. The list goes on!

Myth: Spiders are in my home to escape from the cold.

Actually, most spiders are either indoor spiders or outdoor spiders with few who regularly and purposefully venture through both. Spiders that are indoors are there because that is their preferred habitat, while most outdoor spiders are perfectly suited to withstand the cold weather or it is part of their lifecycle to die off during the winter, depending on the species. This is also why it’s somewhat pointless to “set a spider free” outside out of kindness. While some of us don’t have the heart to smash a spider, a house spider stuck outside will not fare very well. Though, we support you either way, just remember to call us for spider control in Sacramento when things get out of hand!

Myth: Spiders bite you in your sleep.

Waking up with an itchy bug bite, your first thought might be that a sneaky spider took a nibble while you were sleeping! Fortunately, spiders biting sleeping humans are incredibly rare because, in general, spiders are non-aggressive and will only bite if their life is threatened. If a spider is in your bed, you might accidentally make a move that it sees as aggressive, but they won’t hunt you down for no reason. Bed bugs, on the other hand….

Myth: You swallow eight spiders per year while sleeping.

We’re not sure where this myth came from or why eight is the magic number, but regardless, it is completely false. It is unlikely that you will ever swallow a spider while sound asleep, let alone eight per year. As we mentioned above, spiders like to leave us alone while we sleep and an open mouth full of teeth and emitting snores or heavy breathing is likely going to send them running the other way.

Myth: Daddy-long-legs are the most venomous spider in the world.

This myth often continues, “But their mouths are too small to bite humans.” There are a couple of things wrong with this. First of all, depending on what region of the country you are in, there are at least three long-legged critters you could call a daddy-long-legs, and only one of them is actually a spider.

The first is the harvestmen. Though an arachnid, the harvestman is not technically a spider. Its body is not segmented but is instead roughly the shape of a popcorn kernel. This little guy has no fangs or venom glands and only has two eyes.

Finally, the only spider of the group is the cellar spider. These guys are often found in basements and like to eat small insects and other spiders. Cellar spiders do have fangs and do have venom, and though small, they can in fact bite humans. But, like most other spiders, their venom is designed to kill tiny bugs and will, at worst, give a human an itchy bump.

Who To Call For Spider Control In Sacramento?

As your Sacramento pest control company, we are happy to provide our services to get rid of any eight-legged guests in your house. We understand that many people have a fear of spiders and our goal is for you to be able to live comfortably in your home. No one should feel like the pests are in charge of their home, and you can begin your journey to a spider-free living situation today!

As your Top-Rated Local pest control company in the Sacramento area, we have a vast knowledge of the most common types of spiders and can determine not only how they have entered your property, but also why. By understanding this, we are better prepared to get rid of them and stop them from coming back.

Whether you found a specific spider that you need to get rid of or you noticed that there are a lot of spiders and other bugs entering your home, we can help. Give us a call or fill out our contact form today and let us know what your pest problems are. We can schedule an inspection, get rid of troublesome pests, and keep them from coming back with preventative measures.