When it comes to pests that invade our homes, there is perhaps no creature more feared than the eight-legged spider. Spiders have long induced fear in humans and the lore that surrounds spiders has even inspired terrifying films, depicting these creatures as menacing and horrid. In reality, of the creatures that invade homes, spiders are actually one of the most beneficial to have around. While the sight of a spider might send you running, the majority of spiders you encounter have no interest in harming you.

Here at Earthwise Pest Management, we provide quality home pest control in Sacramento and surrounding areas. Not only do we help homeowners take back their property from unwanted guests, we also believe in providing an array of educational materials designed to help you better understand the creatures in your home. Read on to learn more about common spiders in the home and what their presence will mean for you.

What Is A Spider?

While you might think of a spider as an insect, it actually belongs in its own classification — arachnids. Spiders are unique in their body type, with eight legs and two body parts — a head and an abdomen. Spiders are cunning hunters and contain toxic venom, which is used to kill their prey. However, just because a spider contains toxic venom does not mean it is poisonous to humans. Only a few types of spiders will cause a serious reaction in humans if bitten. Most spiders are incapable of hurting a human. In fact, many spiders have fangs that are too short to actually penetrate a human’s skin, making it impossible for them to harm a human. In general, spiders will only bite humans if they are provoked to defend themselves.

The few poisonous spiders that do exist, such as black widows and brown recluses, are usually hidden in dark places rather than out in the open. The spiders that you encounter on a daily basis are generally uninterested in humans and solely focused on catching their prey. Because spiders are adept at catching a variety of other pests, they can actually help to control pest populations in the home. While you may not want these creatures roaming your house, they can be extremely helpful to leave living at your property. 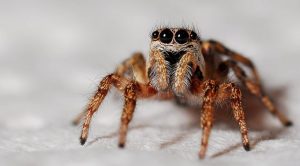 Spiders are active creatures and work hard to catch their prey. Different types of spiders will target their prey in different ways. From spiders that spin classic webs to catch flying insects to cunning spiders that stalk their prey, spiders are effective hunters and eat insects, other spiders, and arthropods.

Spiders are usually hidden out of site, preferring small spaces such as crevices and cracks or piles of debris to live within. Some types of spiders are nocturnal, only coming out to hunt once dusk falls, while other spiders are daytime hunters. Either way, unlike other bugs, such as mosquitoes, spiders will rarely seek out a human to bite.

It is important to note that while encountering and being bitten by a poisonous spider is unlikely, it can occur and if you should have any concern about a spider bite, it is always wise to seek professional medical help.

Here in California, there are a plethora of spider types that you might encounter in your home, garden, garage, or around your property. These spiders each fall within a spider family, which include the following:

Some of the venomous spiders in the region that can cause harm to humans include black widows, brown recluse, and yellow sac spiders. Brown recluse and black widows cause the most harm through their venom, while yellow sac spiders generally only cause mild swelling and pain at the site of the bite. When in doubt, consult with a doctor to find out if your spider bite needs medical attention.

The Life Cycle Of Spiders

Different types of spiders will go through their life cycle at different rates, but all spiders will go through the same general cycle. Female spiders store sperm from mating, which they then use to fertilize eggs that they deposit into an egg sac. Egg sacs can carry anywhere from a few eggs to hundreds, depending on the type of spider. Once the eggs hatch, a spiderling emerges. These spiderlings continue to molt until they reach full sexual maturity. In some cases, a male spider emerges already mature. Female spiders are always larger than their male counterparts, so the molting process may take longer for this sex. Once fully mature, spiders generally live one to two years, with a few exceptions in certain spider types that live over a decade.

What To Do When You See Spiders In Your Home

While your first instinct might be to scream and run the other way, next time you see spiders in your home, remain calm. The majority of spiders you encounter will do you no harm. Reach out to our team to learn more about what you can do to prevent these guests from taking up residence in your abode and how you can keep your home protected from poisonous types. Here at Earthwise Pest Management, we are equipped to help you with home pest control in Sacramento and surrounding locations. Reach out today to learn more.

Defending your family’s home, and businesses from pests